9 myths about moving to the cloud Ebook

Microsoft have produced a great Ebook about moving to the cloud and myths around their services such as Office 365 and Microsoft Azure.

First Class Technologies, as an established and time served IT Solutions partner, continually reviews security matters and cyber threats such as Spear phishing.

Please ensure that your staff are vigilant about not publishing information on Social Media that will mean they can be profiled.

Here is a short news article shown on local East Midlands BBC evening news where David Benford, who has worked for a number of FCT clients, starts to highlight the issues…

Please take care out there, it can be a dangerous place if you are careless!

If you want any advice or assistance to maintain and improve your business security, please telephone or email our team.

9 myths about moving to the cloud Ebook »

‘Insider spoofing’ or faking the CEO’s email address to trick the CFO into transferring millions to criminal bank accounts is big business. Now Microsoft is using big data and reputation filters to try and squish the threat.

According to the FBI, between October 2013 and August 2015, 7,066 US businesses have fallen prey to ‘business email compromise’, netting criminals an estimated $747m.

Non-US victims lost a further $51m over the period, with the FBI estimating a 270 percent increase in identified victims since January 2015, when it first released figures about the threat category.

As Microsoft notes, when a corporate email domain is spoofed, it makes it hard for existing filters to identify the bogus email as malicious.

However, Microsoft reckons it has achieved a 500 percent improvement in counterfeit detection using a blend of big data, strong authentication checks, and reputation filters in Exchange Online Protection for Office 365.

It’s also rolling out new phishing and trust notifications to indicate whether an email is from a known sender or if a message is from an untrusted source, and therefore could be a phishing email.

The company is also promising a faster email experience as it vets attachments for malware and new tools to auto-correct messages that are mis-classified as spam. The aim is to boost defences without impairing end-user productivity.

Malicious email attachments remain a popular way for attackers to gain a foothold in an organization and, as RSA’s disastrous SecurID breach in 2011 showed, a little social engineering can go a long way to ensuring someone opens it.

Currently it captures suspicious looking attachments in a sandbox with a ‘detonation chamber’ where it analyses it for malware in a process takes five to seven minutes.

The company is also tackling false-positive spam, or legitimate messages that are mis-identified as spam, and vice versa, with a new feature called Zero-hour Auto Purge, which allows admins to “change that verdict”.

“If a message is delivered to your inbox and later found to be spam, Zero-hour Auto Purge moves that message from the inbox to the spam folder; the reverse is true for messages misclassified as spam,” Microsoft notes.

Microsoft is testing this approach with 50 customers and says it will be rolled out for all Exchange Online Protection global clients in the first quarter of 2016.

If you’re based in the West or East Midlands, Birmingham, Tamworth, Lichfield, Nottingham, Leicester or Derby then we can help implement Office 365 for your organisation. Please fill out our contact form for more information.

Why we need a public cloud for the public good

Last month, Microsoft chief executive officer, Satya Nadella, announced that Microsoft Philanthropies will donate $1 billion USD in Microsoft Azure cloud computing resources over the next three years to 70,000 nonprofits and NGOs worldwide. Three initiatives are part of this commitment: serving the broad computing, storage, and software needs of the nonprofit community; expanding access to cloud resources for faculty research in universities; and reaching new communities with last-mile connectivity and cloud services. For more information, be sure to read the blog post from Brad Smith, president and chief legal officer.

Midlands-based Small to Medium-sized Businesses get an IT boost 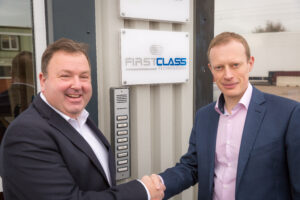 Great news for Small to Medium-sized Businesses (SMBs) in the Midlands has arrived in the shape of a merger between two specialist IT Managed Service companies, First Class Technologies based in Lichfield and Red Cloud IT Solutions of Castle Donington.  The result is a company with an unrivalled portfolio of services specifically aimed at the SMB community. The beginning of February marked the completion of the merger.

Richard Hinton, MD of First Class Technologies said “This new partnership strengthens our portfolio of IT Managed services with the addition of Red Cloud’s specialist Cloud knowledge.  This means we can now offer our clients an enhanced level and range of services, including in-house, hybrid and cloud solutions”.

Tim Rookes, MD of Red Cloud IT Solutions said “I believe that our proposition to the market place is one of the strongest in the area and I’m really looking forward to working with the First Class team.  We both have ambitious plans for growth throughout the Midlands.  By focusing on local businesses, we believe we can bring a much needed range of advanced support services to this sector, often ignored by the bigger players in the region”.

The company will continue to trade as First Class Technologies, with the Head Office in Lichfield, along with the addition of an East Midlands office in Castle Donington.  Richard Hinton said “First Class Technologies has a successful heritage stretching back over 19 years and has always prided itself on providing excellent customer service and building long term relationships.  This merger makes perfect sense for us and our clients, so I and the management team couldn’t be happier”.

Tim Rookes commented “We’ve already started work on streamlining our support service to ensure we continue to provide an excellent customer support experience.  We have also invested in a new cutting edge monitoring and help desk system to enhance our customers’ experience, as well as rebranding the company and launching a new website. This will focus on our strong partnerships with Microsoft and their cloud solutions, such as Office 365 and Azure, and also with Datto, one of the industry’s leading hybrid cloud backup and business continuity systems.

The Company will continue to focus on small to medium-sized businesses and not for profit organisations located within the East and West Midlands.  The managed IT market is growing at a rapid rate due to the adoption of cloud technologies and less reliance on in-house IT teams.  With the excellent team we have at First Class, we aim to be the region’s leading managed IT provider, adding significant value to our clients.”

Why we need a public cloud for the public good »